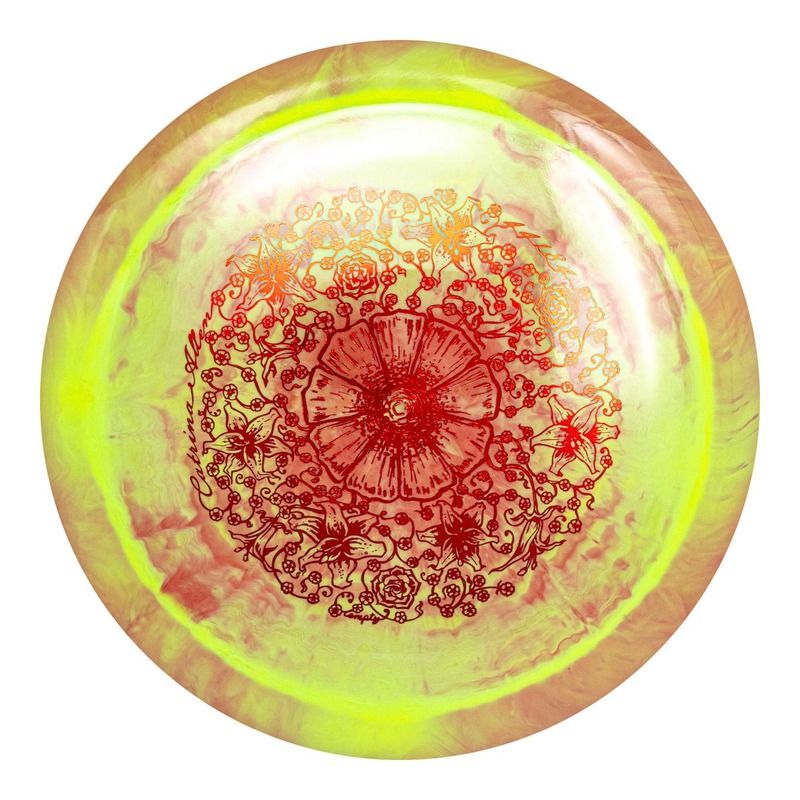 Catrina Allen had a remarkable finish to the 2019 season, claiming both the National Tour Series and the Disc Golf Pro Tour Championship titles. As she continues to prove herself as one of the world’s elite disc golfers, we are proud to announce Catrina’s Special Edition Signature Series X3, a fast, slightly overstable driver with incredible glide, in a brand new plastic-type.

The signature disc will be the first release of our 500 Plastic. 500 Plastic has been in development for quite some time, formulated and based on carefully considered player feedback. It has a stiffer, less gummy feel than 400 Plastic. This provides an extremely confident grip on the flight plate, balancing just the right amount of flex and firmness, with a very solid feeling rim that we believe disc golfers are going to love. To top it off, this first release features our Spectrum Line coloring process, boasting bright, colorful swirls to perfectly complement the floral stamp. You can expect the X3 in 500 Plastic to fly very true to its designed characteristics and flight path.

Catrina collaborated with designer Manny Trujillo to come up with the intricate flowery pattern which makes up the stamp along with her name and PDGA number in script. Each flower has its own significance, relating to Catrina’s career — six large lilies for major wins, four small lilies for PDGA Player of the Year wins, three roses for 2019 NT wins and 150 small flowers for her 150-plus career wins. The disc also features a Prodigy Disc Signature Series bottom stamp.